Here are the top three most romantic restaurants in Camps Bay:

• The Roundhouse Restaurant – On the slopes of Table Mountain overlooking Camps Bay and Clifton. Tel. 021 438 4347
In 2011, The Round House was in the top 10 Eat Out DStv Food Network Restaurant Awards. In the same year it won the Service Excellence Award.  I am eager to see what happens in 2013.
In my opinion it is one of the most romantic restaurants in Cape Town – quite expensive but very romantic.

• Twelve Apostles – Victoria Road, Oudekraal. Tel. 021 437 9000
The Twelve Apostles 5 star hotel is situated just outside Camps Bay.  The views from the terrace is one of the best in Cape Town. Dining at the Azure Restaurant can be a bit stiff and uptight but the view makes it really special.
If you are celebrating your birthday, they offer you a complimentary bottle of sparkling wine to complement your meal.
August special:  The chef’s four-course tasting menu. Available for lunch or dinner, Monday to Thursday: R295 per person. 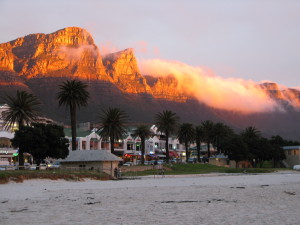