The structure currently being built on Camps Bay beach is a bungalow for the new television series SAF3. Starring Dolph Lundgren,J.R. Martinez and Lydia Hull. 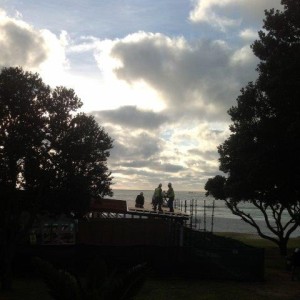 It is an action adventure series with no violence and heaps of romance with no sex.
The makers of the TV series were looking at shooting in countries like Hawaii and Australia but obviously Camps Bay was the location of choice.

After four months of planning, construction of the bungalow started on the 22nd of July and will be completed on the 6th of September. Filming starts on 7 September 2013. The planned completion date for filming is at the end of November. So far 20 episodes are planned and will be shot in and around Cape Town.

They will be spending R160 million and creating 2000 jobs. The base camp is at Maiden’s Cove, near the border of Camps Bay towards Clifton. There will be no restricted access to the beach while filming.

Filming on Camps Bay beach will take place twice a week and no later than 22:30.

The beach bungalow being built is located between the traffic lights in Camps Bay Village and the public toilets on the beach. It is built out of wood and environmentally friendly, it is only assembled on the beach and built elsewhere. When filming is completed, the beach bungalow will be packed up and moved away. It sounds like the most idyllic holiday home, complete with a jacuzzi on the patio.

There will be 24 hour security. Trained life guards and medics will be on duty while shooting is taking place on the beach. They will be working close with the NSRI.

There are information boards up around Camps Bay if anyone has any questions.