Back in England, we met up with Mike’s family in York, we all stayed in a house in Osbaldwick.  The village has been in existence since the 11th century, and was declared a conservation area in 1978.

Yorkshire has recently been chosen as the best place to visit in Europe. They call it God’s Own County, and now you know why.

Friday evening we had a great family dinner at the house with loads of wine and laughter.

On Saturday my cousin and his wife drove down from Durham and we went for lunch and caught up on family gossip and years gone buy.   Afterwards Mike and I explored the narrow streets of York, York Minster, the Shambles and Rowntree Park.

Saturday evening was another raucous family dinner at home with loads of wine, homemade chicken pie, salad and a summer pudding.

Sunday morning after a cooked English breakfast, we set off with a packed picnic, large flask, loads of rain coats, binoculars and a heap of hiking boots.  We walked the Brempton Cliffs and watched gannets and puffins circle the dramatic cliffs. An elaborate picnic was set out under the trees with lemon and chocolate cake for dessert followed by coffee and strong Yorkshire tea.

Before heading home we visited the elaborate Howard’s Castle http://www.castlehoward.co.uk where Bride’s Head Revisited was filmed.

At home we all got dolled up and then enjoyed a bottle of French Champagne before hitting the town. We went for dinner at Barbakan www.deli-barbakan.co.uk a Polish restaurant in Walmgate Street lined with hipster joints. We shared plates of pierogi  for a starter and main course was pancakes, hunter’s stew, stuffed cabbage leaves and duck with a few bottles of pinot grigio.

Monday morning after a family breakfast it was time to say good bye again.

We went to have tea with the owners of Bali Place www.baliplace.co.za in Leeds.  The weather at that moment was still sunny and we sat in their beautiful garden.

An hour later it was drizzling and as it was a bank holiday we crawled down the motorway to Heathrow.

Just as much as I love going on holiday, I also enjoy coming back to Camps Bay and not living out of a suitcase. Now back in Cape Town our autumn is similar to the European spring. 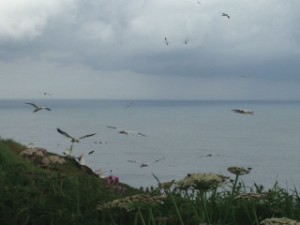 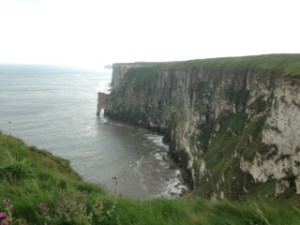 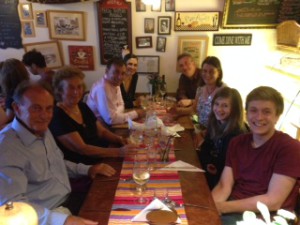 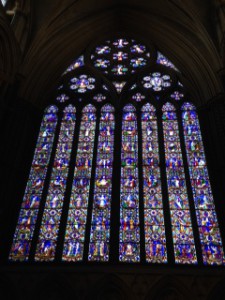